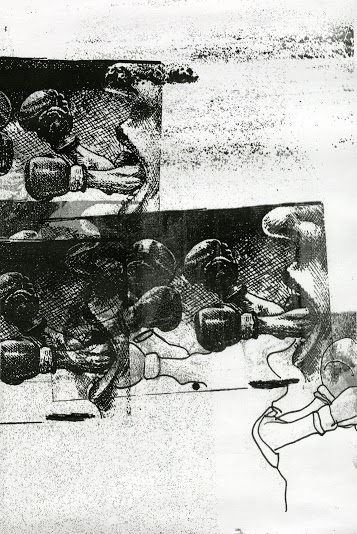 D.S. Kinsel is a visual/installation artist from Pittsburgh, PA. A self-taught,
left-handed artist, Kinsel’s work is a reflection of his race, culture, and
generation. He strives to encourage audiences to reevaluate their ideas of
fine art. His work shows in a number of venues across Pittsburgh including
Future Tenant, Shaw Galleries, ASSEMBLE and ImageBox. Popular online
artists blogs Hyperallergic Labs, 7 Shades of Black, and the Jenesis Magazine
have helped spread his work to a larger audience. In 2012, Pittsburgh City
Paper ranked Kinsel’s Twitter profile the 3rd best in the city. Kinsel was a
recipient of the New Pittsburgh Courier “Fab 40” Award in 2012. Kinsel was
recently recognized as a 2013 Pittsburgh Magazine 40 Under 40 honoree.
A 2013 recipient of the Advancing Black Arts in Pittsburgh grant, Kinsel is
the artist in residence at 720 Music, Clothing, and Cafe. He strives to inspire
new thought by sharing his views and interpretations of popular culture
through avant-garde expression. Kinsel regularly donates his work to support
various non-profits and community based organizations around the city.
He also assumes MC’ing responsibilities for special community events with
organizations such as the United Way and Kelly Strayhorn Theater.

iThere are no comments

Begin typing your search above and press return to search. Press Esc to cancel.